The exhibition entitled Your city is a battleground raises the question of the relationship between art and conditions for its production in a city dominated by neoliberal logic of the last 25 years.

During that period the hold of the single authority over the city space has been broken. Brand new, complex conflicts founded on various, often historic or religious premises within its network of notions have emerged. The city has once again become the platform for open policy, economy and ideological disputes.

On the one hand, it resulted in the active citizenship of urban movements, attempting to negotiate all change at the grass roots level. On the other hand, however, the city has become the space with an unregulated market driven by a prospect of profit. In this vision, the euphemism of “the free market”, has become the tool of huge companies’ monopoly and a competitive race, which has its clear winners and invisible losers. The recovered city quickly started to stratify into recovered public space and fenced off privatized properties.

Warsaw, as the capital, remains not only a city serving its inhabitants, but also a place where decisions and deals are made, and demands and attitudes concerning other parts of the country are manifested.

Artists have become some of the many decision makers with regard to the visible shape of the city. Oftentimes their works were an example of the critical reflection; they initiated debates, thus becoming a litmus test of social tensions, saturated in the new content. Other projects were commissioned by patrons or corporations in order to improve the living space – sometimes by decorating, or gentrifying it according to the fashion for art festivals organised in public space, or filling cities that want to promote themselves with gadgets. However, certain rare pieces served as a kind of “community microphone” for the excluded. The exhibition features various examples of these realisations, both successful and failed in terms of fulfilling their initial assumptions.

The military-sounding title refers to the famous piece by Barbara Kruger, Your body is a battlefield, shown in Warsaw in 1995 in the context of the debate on women’s right to abortion. Such a paraphrase indicates the physical aspect of the issue. The starting point for all action and awareness is our body, and in the social sense – it is one separate, subjective body alongside another one. Two bodies initiate the economy (e.g. barter), while three can initiate politics and establish their own standing in relation to one another.

The exhibition takes up two floors of the Jabłkowscy Brothers Department Store in Warsaw, one of the emblems of Poland’s prosperity in the interwar period, which several times changed its function (shops, offices, art gallery) both during the Communist period and afterwards. This “warehouse of satisfied customers”, as it was advertised, paradoxically becomes the background for the visual history of the Polish transformation and its consequences as regarded from the visual arts’ point of view. An important part of the Polish transformation is a thread omitted in many historical summaries – its social cost: decreased quality of life for the considerable part of the citizens for whom there was not enough “safety net” in the Polish “shock therapy”.

The art show consists of the most important, although sometimes forgotten works created after 1989, devoted to the image of the city’s social transformations. Artists featured in the exhibition represent various generations, artistic approaches, and circles; they use different media and constitute a wide cross-section of the Polish art scene. Documentation of artistic actions will be displayed as well.

It is most surprising that during transformation, the issue of economic conditions did not merit an appropriate artistic response in the form of numerous visual (as well as theatre, film, or literature) works. The 90s gave us the abundance of works with narration that was liberal in terms of morals, but not social issues. In the words of poets from 1992: not a fucking idea outside (Marcin Baran, Marcin Sendecki, Marcin Świetlicki). To a large extent artists trusted the ideology of the invisible hand of the free market, which turned them into victims of precarity, outsiders in the process. Lately, they have started to raise the issue, having perhaps realized that it directly concerns them as well.

The attempt to categorise the art of the last 25 years from the social and economic perspective would therefore look as follows:
– 1990s: rare works connected to the subject of the atomisation of society subjected to the pressure of competitiveness;
– after 2000: agoraphilia versus agoraphobia related to the execution of the so-called “art in public space”;
– anti-corporate works in the vein of the alter-globalist criticism of capitalism, numerous especially after the publication of Naomi Klein’s book No Logo;
– artists’ actions connected to their economic status in society (creation of the Civic Forum for Contemporary Art, artists’ strike in 2012, etc.)

The exhibition encourages the creation of alternative images of history. It also aims at prompting people to look at the Polish art scene from the perspective of economic conditions, and its relationship with society not only in terms of the “cold war with society”, or “applied social arts”, but also as a medium of a participating social formation: a (self)conscious part of the society that experiences democracy through the criticism of its own institutions. The subject of the artist’s social self-awareness becomes therefore a parallel narration of the Your city is a battleground exhibition.

Your city is a battleground 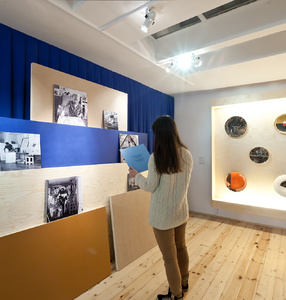